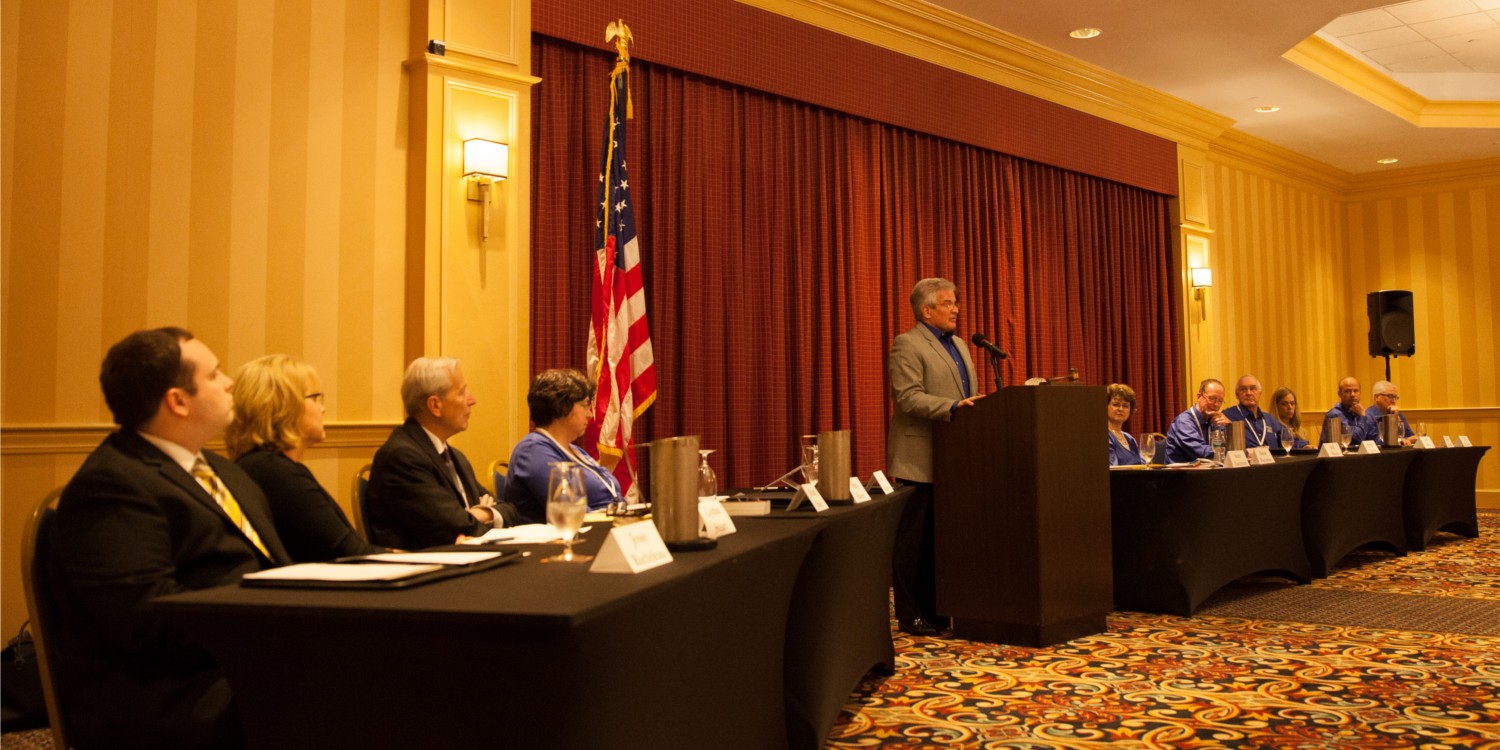 I) Robert’s Rules of Order shall govern the meeting in all cases in which they are applicable and in which they are not inconsistent with the Bylaws of the Association of Vermont Credit Unions, A parliamentarian shall be appointed by the Chairman.

II) All committees, unless specifically provided, shall be appointed by the presiding officer

III) The report of the Credentials Committee shall be accepted as evidence of delegates and alternates in attendance at the Association meeting in determining the presence of a quorum.

IV) Regarding decorum and debate, only Association directors, the Association president, and delegates, or their alternates, are entitled to the use and privilege of the floor. The chair may use its discretion in all other cases.

•          The presiding officer may designate the method to be used unless over-ruled by majority vote on appeal from the decision of the Chair.

The Nominating Committee of the Association of Vermont Credit Unions has performed the task of selecting candidates to fill terms expiring on the Association’s Board of Directors at the upcoming 2022 Annual Meeting of members.

On February 24, 2022 a request was sent to member credit unions for the purpose of soliciting names of possible candidates to fill the vacancy. After careful consideration, the Committee decided to nominate Jean Giard of Vermont Federal Credit Union and Greg Hahr of New England Federal Credit Union for election to the Association’s board of directors.

Association bylaws allow for additional nominees to be added to the ballot by petition. Any qualified individual seeking to be added to the 2022 director elections ballot was required to submit his / her completed petition and qualifications to the Nominating Committee by April 15, 2022.  No petition candidate nominations were received prior to the deadline, so the slate of candidates remains as originally presented.

As the original slate of candidates remains unchanged, with two candidates for two expiring positions, both candidates will be elected by acclamation during the annual business meeting which will be held Friday, May 20th at 3:00 PM in the Valhalla Boardroom at Jay Peak Resort.

Jean is the President & Chief Executive Officer of Vermont Federal Credit Union (VTFCU), a nearly $873 million institution (as of 12/31/21) serving more than 47,400 members throughout Vermont’s 14 counties. Prior to joining VTFCU as CFO in 2006, she became a Certified Public Accountant and was a partner in a local firm where she was responsible for audits at numerous banks and credit unions. She was named Vermont FCU’s President & CEO in February 2017 after being named to the job on an interim basis for more than two years. Jean began her service to Tricorp Federal Credit Union’s Board of Directors in September 2021 following three years serving on Tricorp’s Supervisory Committee. She also serves on CUNA’s Credit Union Legislative Action Committee’s Board of Trustees, is a Certified CUES Innovation Executive, and has attended several CUES conferences, seminars, and institutes. In the community, she is Vice-Chair of the Board of Directors at Make a Wish Vermont and serves on the Finance Committee of Converse Home, a small non-profit. She graduated with a B.S. degree in Psychology from the University of Vermont and has an extensive background in finance and business.

Greg is Chief Lending Officer for New England Federal Credit Union (NEFCU) a nearly $2 billion institution (as of 12/31/21) serving more than 95,700 members throughout Addison, Bennington, Caledonia, Chittenden, Franklin, Grand Isle, Lamoille, Orange, Rutland, Windham, Windsor, and Washington Counties in Vermont, Cheshire, Grafton, Merrimack, and Sullivan Counties in New Hampshire, and four counties in Michigan through its Direct Financial division. He has been with NEFCU since 2010, previously serving as Mortgage Manager. His prior experience includes 30+ years of executive and managerial experience with financial institutions and mortgage companies and he is a past president and vice-president of the Vermont Mortgage Bankers Association. He holds a bachelor’s degree in Business Administration with minor in Economics from the University of Vermont, has completed the CUNA CEO Institute, CUNA Regulatory Compliance School, and is a 2017 graduate of Leadership Champlain. In the community, Greg has served on the Starksboro Zoning Board of Adjustments, multiple school boards, and for more than a decade has been an active coach of youth soccer, basketball, and softball.

After reviewing the report and supporting documentation, the Audit Committee found it to be thorough and understandable. The financial statements were found to be in balance, with proper accounting procedures being followed.

Available as a separate document are the Consolidated Financial Position and Consolidated Statement of Activities for the Association of Vermont Credit Unions, Inc. and Subsidiary as of December 31, 2021. A copy of the Reviewed Financial Statements and Report is on file at the Association office and is available to member credit unions upon request.

We want to thank Association staff and A.M. Peisch & Company for their cooperation in explaining and reviewing the financial report of the Association of Vermont Credit Unions, Inc. and Subsidiary.

The seventy-fourth Annual Meeting of the Association of Vermont Credit Unions, Inc. (AVCU) was called to order by Chairman Sean Gammon at 3:10 p.m.

Secretary Rick Hommel announced that the Official Call to the 74th  Annual Meeting was emailed to all member credit unions on March 26, 2021.

The Credentials Committee Report was given by Secretary Hommel, who stated that 10-member credit unions were present for a total of 20 delegate votes.  A quorum was declared.

A motion was made by John Dwyer (New England FCU), and seconded by Tracey Thibodeau (Vermont VA FCU) that Robert’s Rules of Order and the “Rules of Order” as published on the Reports page of AVCU’s online Annual Yearbook be adopted as governance for the meeting.  SO VOTED.

Chairman Gammon thanked President Bergeron and the staff for the work done during the previous year.

Minutes – A motion to dispense with the reading of the Minutes of the 73rd Annual Meeting and to accept them as published on the Reports page of AVCU’s online Annual Yearbook was made by Matt Levendowski (Heritage Family FCU) and seconded by Tracey Thibodeau (Vermont VA FCU).  SO VOTED.

Vice-Chair and Election Committee Chair Allen declared that as there were three candidates for the expired terms, that Sean, Rick and Lisa were elected by acclamation, then congratulated them.

Chairman Gammon then announced that he would be stepping down as Board chair at the end of this meeting with comments on his many years of board service with the last 10 being Board Chair.

Reports – Chairman Gammon thanked the members of all AVCU Committees for their work throughout the year then called upon President Joe Bergeron for his management report, who thanked and commended Chairman Gammon for his past decade as board chair, commented on Association and Vermont credit unions operations during the past year of pandemic, and noted the Association’s financial success and patronage refund for the 13th year in a row in 2020.

A motion was made by Tracey Thibodeau (Vermont VA FCU) and seconded by John Dwyer (New England FCU) to dispense with the reading of reports and accept them as published on the Reports page of AVCU’s online Annual Yearbook.  SO VOTED.

Adjournment – The meeting was adjourned at 3:27 p.m. upon a motion by by John Dwyer (New England FCU) and seconded by Matt Levendowski (Heritage Family FCU). SO VOTED

At a re-organizational board of directors meeting immediately following the AVCU Business Meeting, the following officers were elected for 2021/ 2022:

The 75th Annual Business Meeting of your state credit union trade association will be held at Jay Peak Resort on Friday, May 20, 2022 at 3:00 PM. We offer the following information to help you be a more effective Delegate.

Upon arrival at Jay Peak Resort on Friday afternoon, please be sure to first check-in at AVCU's Convention Administration desk in the Pepin Room to receive your name badge bearing the “DELEGATE” placard (reserved for the #1 or #2 designated delegates from your credit union) or an “ATTENDEE” placard if you’re an Alternate.

WHERE AND WHEN - The Association Business Meeting will commence promptly at 3:00 PM in the Valhalla Boardroom on the 4th level of The Hotel Jay. All appointed Delegates (or their Alternates if applicable) are asked to check in with the Credentials Committee at the entrance to the meeting room starting at 2:40 PM.  At this time, you will be confirmed as an official Delegate from your credit union.  Please confer with your delegation prior to the meeting to be certain your appointed Delegates are present or to determine the need for Alternates.

BUSINESS MEETING REPORTS - There are several reports which may be of value to you during the Business Meeting.  These include the Agenda and Robert's Rules of Order, Minutes of the 74th Business Meeting, reports of the 2021-2022 Audit and Nominating Committees, and AVCU, Inc. & Subsidiary 2021 Financial Statements.  You may request a digital copy of these reports by email or ask for a printed copy at the Credentials Committee table when you check-in at the Business Meeting.

With the exception of the financial statements, all of the above documents are available to be read or downloaded from AVCU's Annual Reports webpage.

We request that all Delegates be checked in and seated no later than 2:55 PM in order to determine a quorum and allow the meeting to convene promptly at 3:00 PM.

DELEGATES - Per Association Bylaws, each member credit union attending the meeting is allowed two (2) votes regardless of the number of Delegates / Alternates present. Thus, a credit union which sends one Delegate may cast both of the credit union's votes in elections or other votes requiring printed ballots.

ALTERNATE DELEGATES - If a designated Delegate cannot attend, a legal Alternate (as certified by the credit union's CEO) may take his / her place. The designated Alternate will be entitled to the same voting privileges as the Delegate.  Alternates replacing a Delegate must inform the Credentials Committee when checking in at the Business Meeting.

PARLIAMENTARY PROCEDURE - The Board Chair of the Association of Vermont Credit Unions will preside at the meeting and designate an official parliamentarian to assist. The parliamentarian may only be addressed through the presiding officer. Those wishing to speak should address the presiding officer as Madam Chair, wait until they are recognized, and then state their name and the name of their credit union prior to asking a question or making a comment that will be recorded in the meeting's minutes.

In addition, when making or seconding a motion, Delegates are asked to clearly state their name and credit union in order for the recording secretary to maintain accurate minutes.  The meeting will be conducted according to Robert’s Rules of Order.

AVCU appreciates your participation in our 2022 Business Meeting!